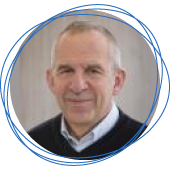 Michel Devoret
Frederick W. Beinecke Professor of Applied Physics
Michel Devoret focuses his research on experimental solid state physics with emphasis on quantum mechanical electronics or “quantronics.” In this new type of electronics, electrical collective degrees of freedom like currents and voltages behave quantum mechanically. Such mesoscopic phenomena are particularly important in the realization of quantum information processing superconducting devices based on Josephson junctions, which is his main research goal. He currently focuses on the new phenomena of fault-tolerant quantum memory and remote entanglement.

Devoret is a member of the American Academy of Arts and Sciences and a member of the French Academy of Sciences. He serves on the board of the Yale Quantum Institute and is among the Yale researchers involved with the Center for Quantum Networks, funded by the National Science Foundation, and the Co-design Center for Quantum Advantage (C2QA), led by Brookhaven National Laboratory.
Close